JavaScript is required to use Bungie.net

Oct 31, 2019 - dmg04
This week at Bungie, we’re hosting a celebration.
Festival of the Lost has been unleashed on the Tower. Cobwebs are everywhere, black cats are on the prowl, and every vendor has some candy for you to enjoy. Eva Levante went all-out this year on decorations and brought some new masks for you to earn. While candies and treats are readily available, you also have the BrayTech Werewolf to earn, packing the multikill clip punch.
The Tower isn’t the only place that’s a bit spookier. There’s been an uprising on the Moon, and Eris is calling on you to challenge the Hive in the Altars of Sorrow and the Pit of Heresy.
Xenophage made its grand entrance, bug and all. We’ve seen Guardians cracking the puzzle and claiming their Exotic in real time, but it isn’t the only new weapon for you to add to your arsenal. We’ve got some Hive-infused weapons that not only look mean, but back it up with some serious firepower. 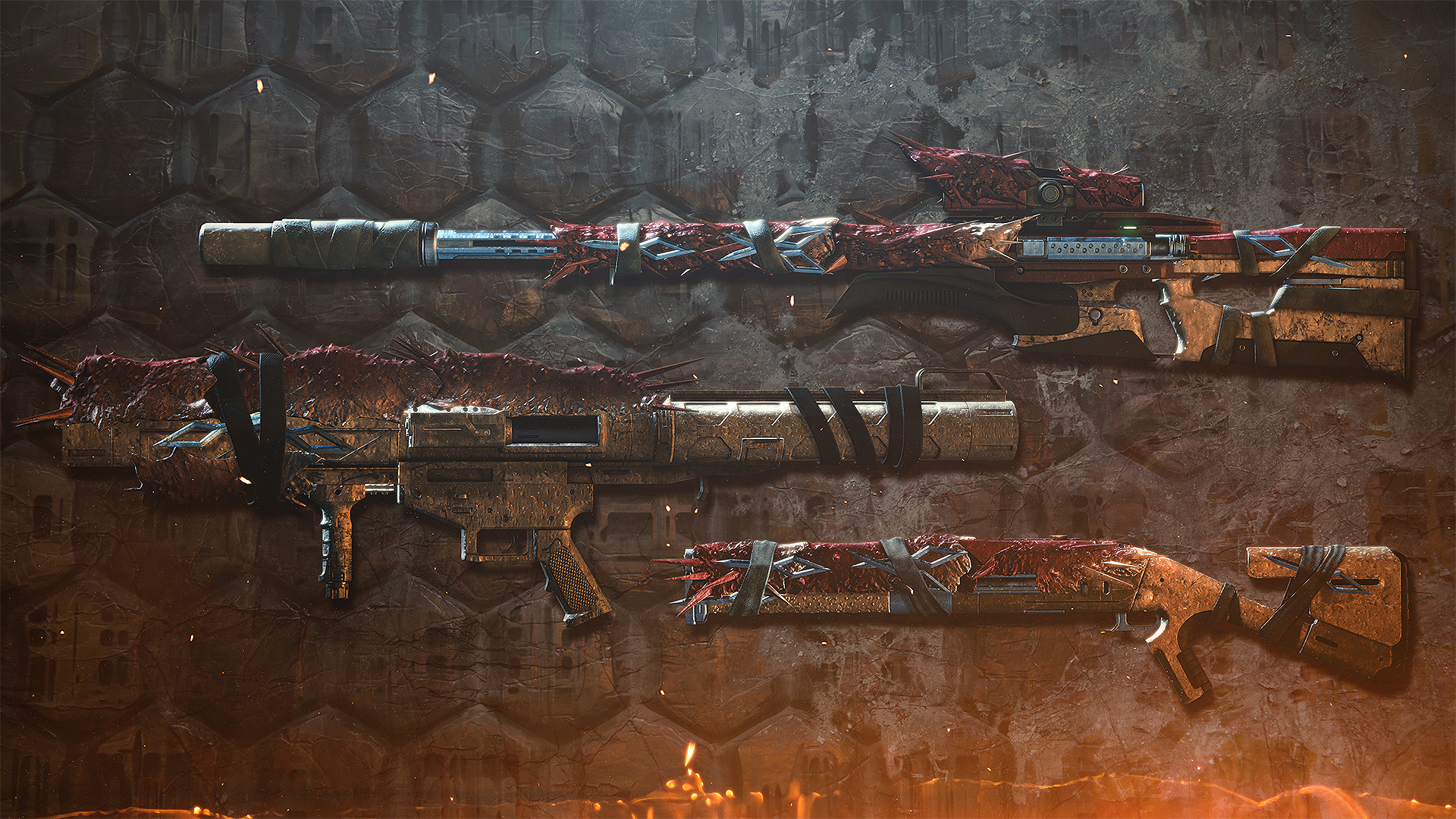 If you’re wanting to take on opposing Guardians with a bit more lethality, Momentum Control has arrived. Fast respawns, quicker kills, and ability regeneration tied to the defeat of your opponents. Get out there and make Shaxx proud.
So, now that we’ve covered everything that went live on Tuesday, let’s see what else is on the calendar: A charity, a costume contest, a hotfix, a bounty, and more are inbound.

Even with everything going on, we can take a moment to appreciate the little things in life. A bit of humor in the face of fear. Eva Levante is hosting the Festival of the Lost this year, and we have another opportunity for players to earn the Levante Prize. Throw on a mask, embrace your inner darkness, and join us in celebrating Festival of the Lost 2019. 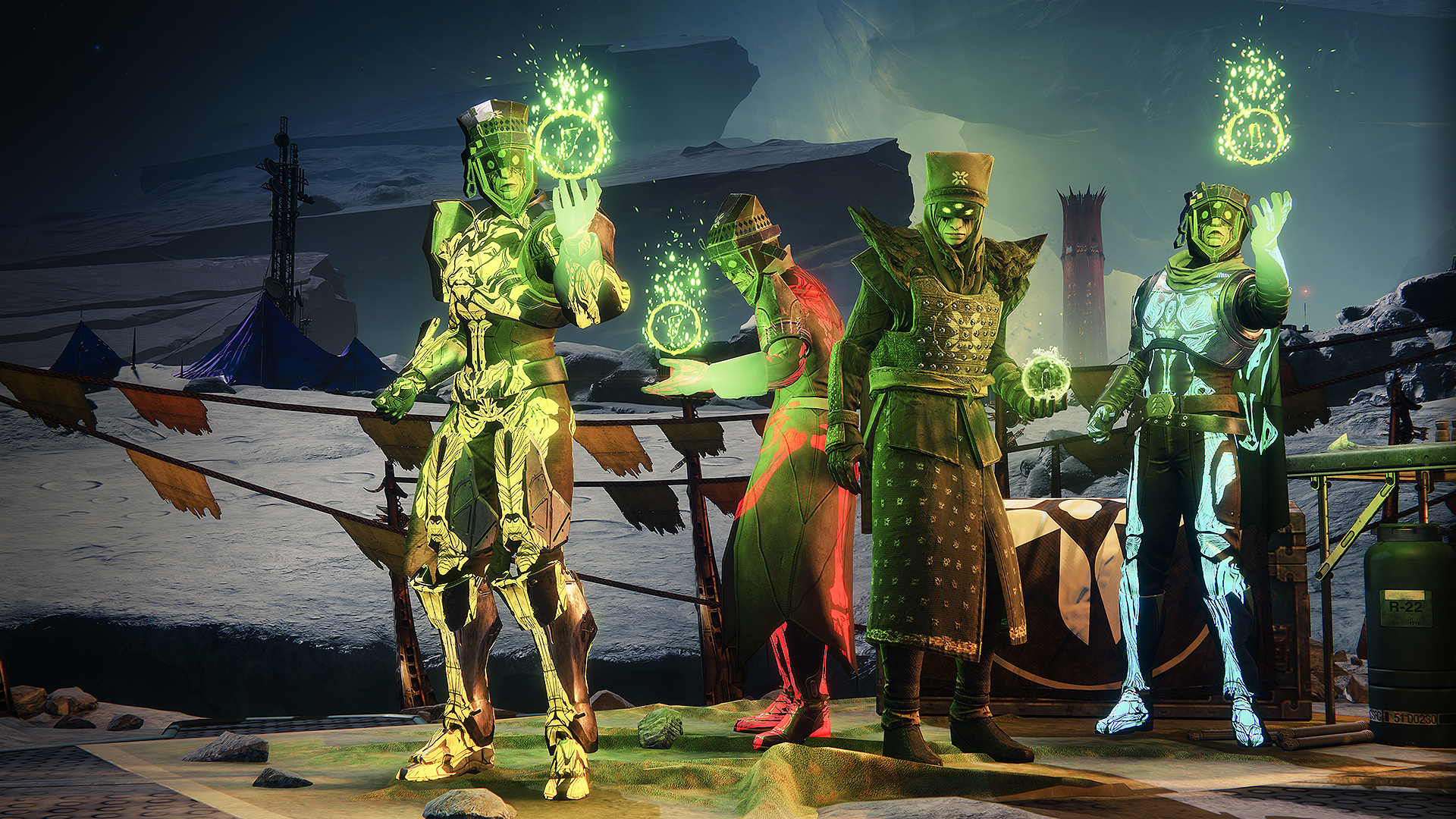 Want to participate? Here’s how:

While we’re all for fun and games, we’d love for you to try and scare us while you’re at it. Bonus points to those who do.

Destiny 2 Hotfix 2.6.1.1 is tentatively planned for Thursday, November 7. It contains some quality-of-life fixes for the sandbox and Season Pass weapon acquisition. One of the more major changes deals with your pursuit of pinnacle Power. While we’ll be providing a patch note preview below, we have some words from the team on our initial goals for pinnacle Power and why we’re making some adjustments.

Dev Team: When we designed the pinnacle band of Power for Season 8, our intent was to provide an aspirational progression that reflects participation in some of the more difficult and time-limited content of Destiny 2. This was meant to be a slower progression than the powerful reward band, but one that wasn’t a gateway to accessing content.
We’re not hitting our goals for the availability of rewards in all slots for the pinnacle-level rewards. You may have experienced getting duplicate Energy weapon drops from these sources, which is compounded by the need to get a drop in all slots in order to gain enough Power to raise your character’s overall Power by 1. To mitigate this, we have increased the Power granted by pinnacle rewards to +2 instead of +1.
Once this change goes live, only four slots will be needed to increase your character’s average Power, at which point your powerful rewards will allow those slots that you might have missed to catch up. Our goal is that the pinnacle band remains a reward for tackling the more prestigious challenges, but takes some of the sting away from receiving multiple drops in the same slot. We appreciate all the feedback that we’ve received on this, we and hope to hear more from you on how this band of progression feels with the new change.

PLEASE NOTE: As this change is currently planned for next Thursday, players should wait to earn their pinnacle rewards until this hotfix is available so they can take advantage of the +2 change.
Alongside the changes to pinnacle rewards, we’re also adding the Season Pass weapons (Pluperfect and Temporal Clause) as possible rewards from the Vex Offensive activity. While players may currently unlock the chance for these weapons to drop with random rolls from the Crucible, Gambit, and strikes, we wanted to add them to another activity to give players more agency in earning random rolls. 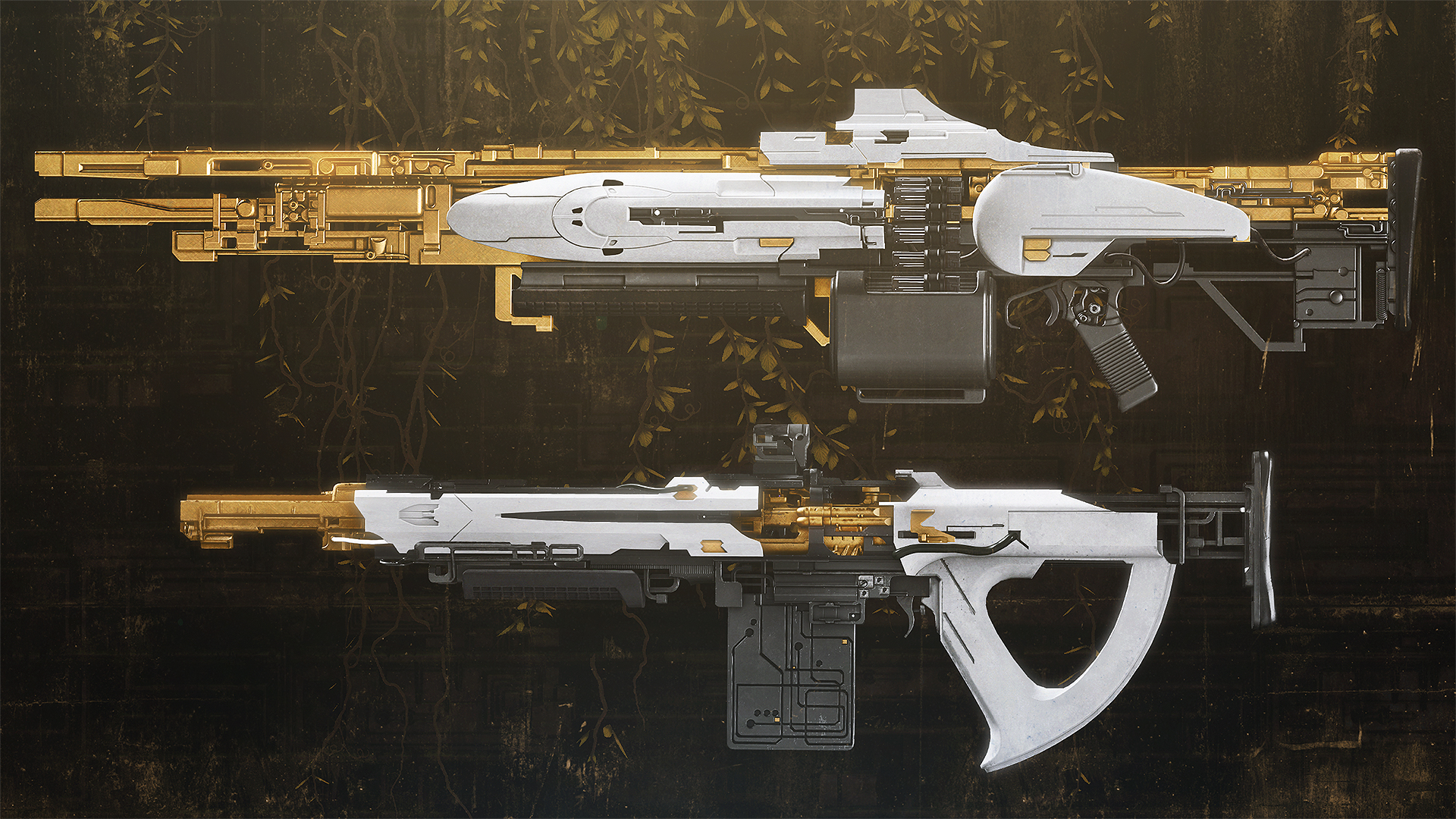 Additionally, we’ve developed a fix for ashes to assets to prevent Telesto from being the absolute best-o, where players could earn their Supers far more quickly than intended.
Stay tuned to @BungieHelp for updates on the exact time and date of this hotfix.

Amid all this excitement, Lord Saladin wanted to get in on the action. The Iron Banner returns next week, bringing Power-enabled combat back to the Crucible. With a handful of bounties in tow, you’ll have opportunities to earn the Iron Will armor set, along with some pinnacle-tier rewards.
Iron Banner Control
Starts: 9 AM Pacific on November 5
Ends: 9 AM Pacific on November 12
Note: You may be thinking “Wait, 9 AM? What’s going on here?” – Day Light Savings ends this weekend for us in the states. I know, it’s confusing. I don’t really know why it happens either. You can find more information in the Player Support Report later in this very article.
Earlier this week, Destiny 2 Update 2.6.1 introduced changes to Heavy ammo spawning in the Crucible. The following change will also be present within the Iron Banner:
Now, to make sure we say it again, we are currently planning a hotfix that will increase pinnacle reward Power gains next Thursday. We highly recommend that players wait to redeem any Iron Banner bounties which reward pinnacle gear until the hotfix has been applied.
We also fixed an issue in 2.6.1 that was causing the Iron Banner bounties to reset daily. Players will have four bounties to complete throughout the week.

If you follow your community news, you know that Gothalion is on the move to a new streaming platform. To ensure a nice, warm welcome in his new home on Mixer, we’re inviting the internet to hunt him down in the Crucible. We’ve placed a Bungie Bounty on his head! It seemed like the neighborly thing to do…
Bungie Bounty—King Gothalion
Saturday, November 2, 10 AM–Noon Pacific
Momentum Control on PC
www.mixer.com/kinggothalion
Festival of the Lost has introduced a new competitive mode in the Crucible. If you play on PC, that’s your hunting ground. The rules are simple: Match with Gothalion, as either a teammate or an opponent, and win. The game must be played on his stream during the two hours allotted. To the victors go the new Bungie Bounty emblem.

This is a housewarming party and you’re all invited to attend. Bring snacks and ammunition. This is one of those rare occasions in which stream sniping is encouraged!

This week was also host to the inaugural Game2Give charity event, supporting the Bungie Foundation’s iPads for Kids program and Children’s Miracle Network Hospitals. We’ve been blown away by the community involvement, as we’ve raised nearly 1 million in donations from Guardians around the world. The charity is still going, and this weekend continues the event with DCPLive, joined by special guest Pete Parsons!

As a reminder, we have a few incentives for each donation, 100% of which goes to the charity!
We’re having many more players join in on this event through the weekend, so stay tuned to http://bung.ie/game2givestream for more information.

Two-Six-One was our most recent update. We’ve got a slew of changes that have gone live, but it seems that the Izanagi’s Burden quest line continues to evade some players. Destiny Player Support is on the case, bringing the most up-to-date information on what we’re tracking.
This is their report:

Izanagi’s Burden
Earlier this week, we deployed Destiny 2 Update 2.6.1 to players. With this update, we resolved an issue that was preventing a subset of players from completing the Mysterious Box quest to receive Izanagi’s Burden.
Following this update, however, new issues have emerged which block progression further down the line for this quest. Specifically, Destiny Player Support is tracking the following two issues:
These issues are currently under investigation, to be addressed in a future update. Players who are encountering other issues with Black Armory forges or the Mysterious Box quest should report to the #Help forum.
Festival of the Lost
This week, Festival of the Lost returned in Destiny 2. Eva Levante has made sure that this Festival is open to all.
For anyone joining us in progress, let’s review the entry requirements outlined last week:
Don’t forget to wear your favorite mask when completing activities around the solar system. Wearing a mask is required in order to earn candy and Chocolate Strange Coins.
Lastly, this year’s Festival of the Lost will conclude at the weekly reset on November 19. Players looking for more information on Festival of the Lost should see our official guide.
Destiny 2 Known Issues
In addition to issues with the Mysterious Box quest tracked above, Destiny Player Support is investigating the following issues to emerge in Destiny 2:
For the latest known issues to be confirmed by Destiny Player Support, players should visit our Known Issues thread in the #Help forum.
Daily and Weekly Reset Time Change
Beginning this Sunday, November 3, Daylight Savings Time in the United States will end. This means that Destiny 2’s reset time will change to 9 AM PST (1700 UTC) through March 2020.
For more information, please view our Destiny 2 Ritual Reset Guide.

In the process of creating a masterpiece, projects often undergo multiple names before settling on a final title. x360_Noscope_Blazex may have been your first file name, but eventually you settled on “Awesome Headshot Montage MOTW Submission.”
There’s no shame in that. Let’s see who the winners are for this week.
Movie of the Week: You're a wizard, Wumbo!

Honorable Mention: “I spent two hours playing Tire game and didn’t get a perfect score on Wednesday so this MOTW submission actually makes me kind of angry.” —dmg04

If you'd like to throw your project in the ring for the chance at a sweet emblem, head over to the Community Creations page.
It’s been a while since I’ve had the driver’s seat on a TWAB. It’s good to be back. What’s your favorite weapon that’s come from Shadowkeep so far? Shoot me a tweet, sound off with your favorite rolls. I just earned some sweet bread last night…

Maybe we’ll run into each other on the Moon this weekend, or in Momentum Control.
Cheers,
Dmg04